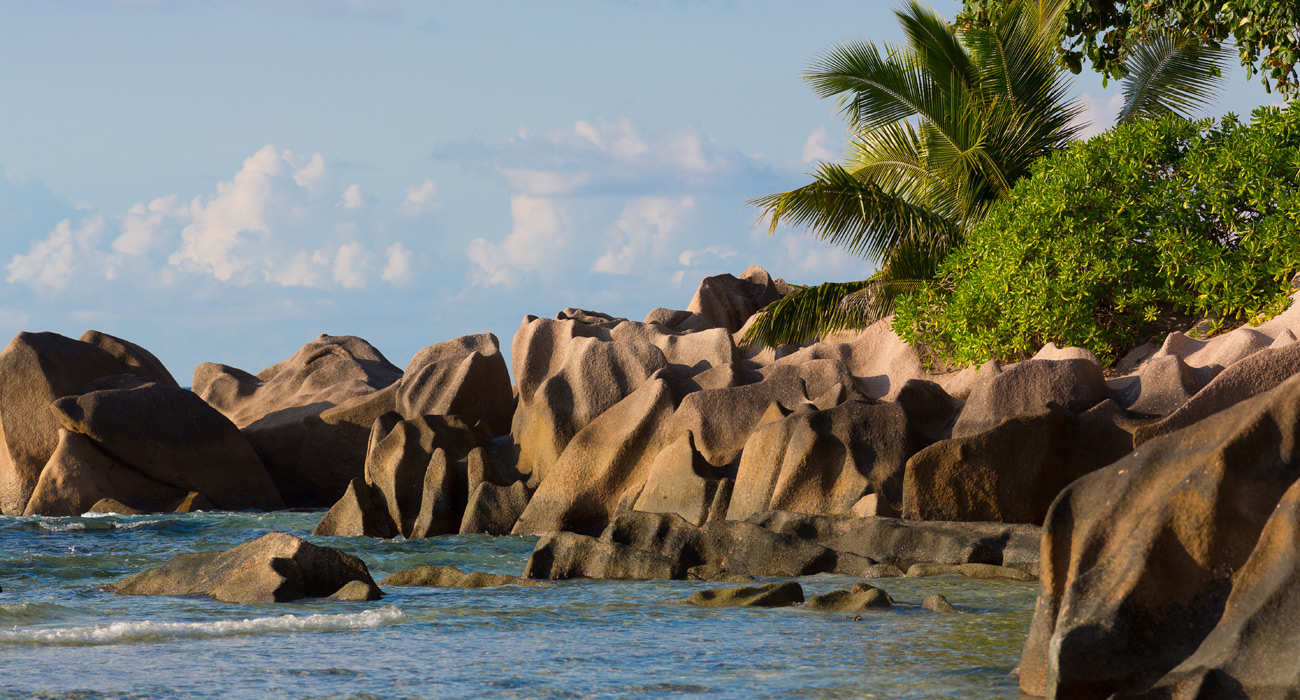 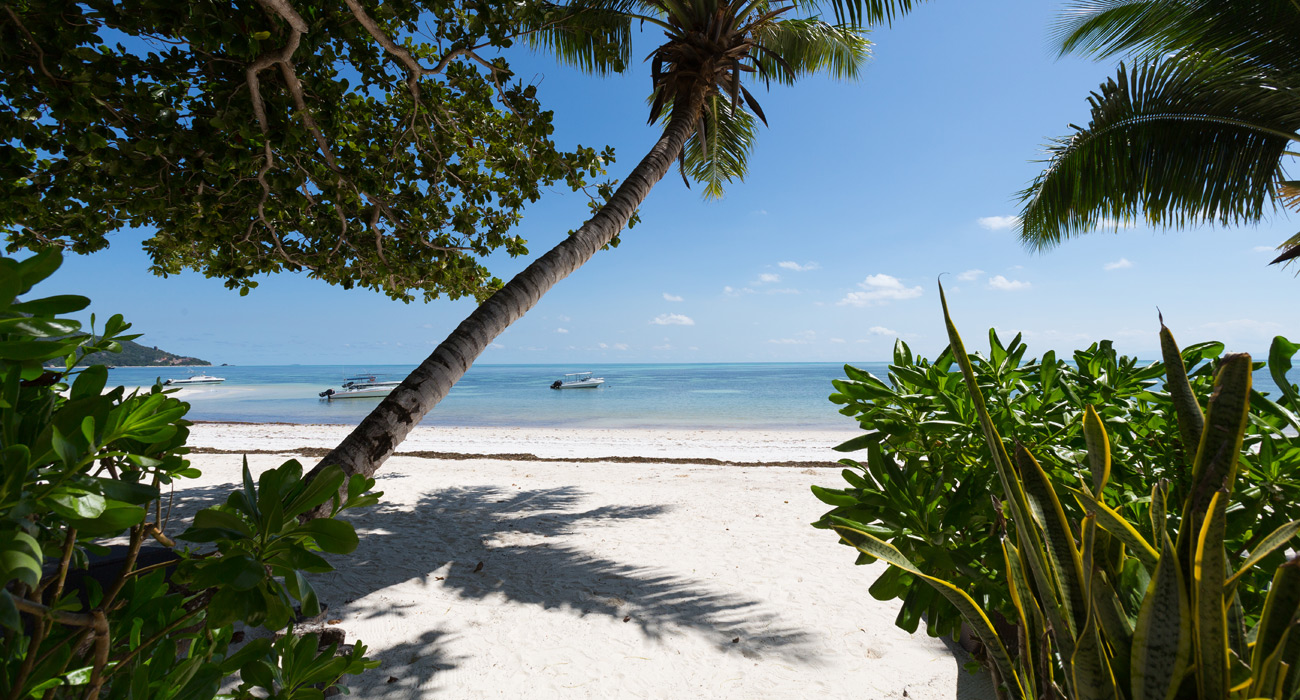 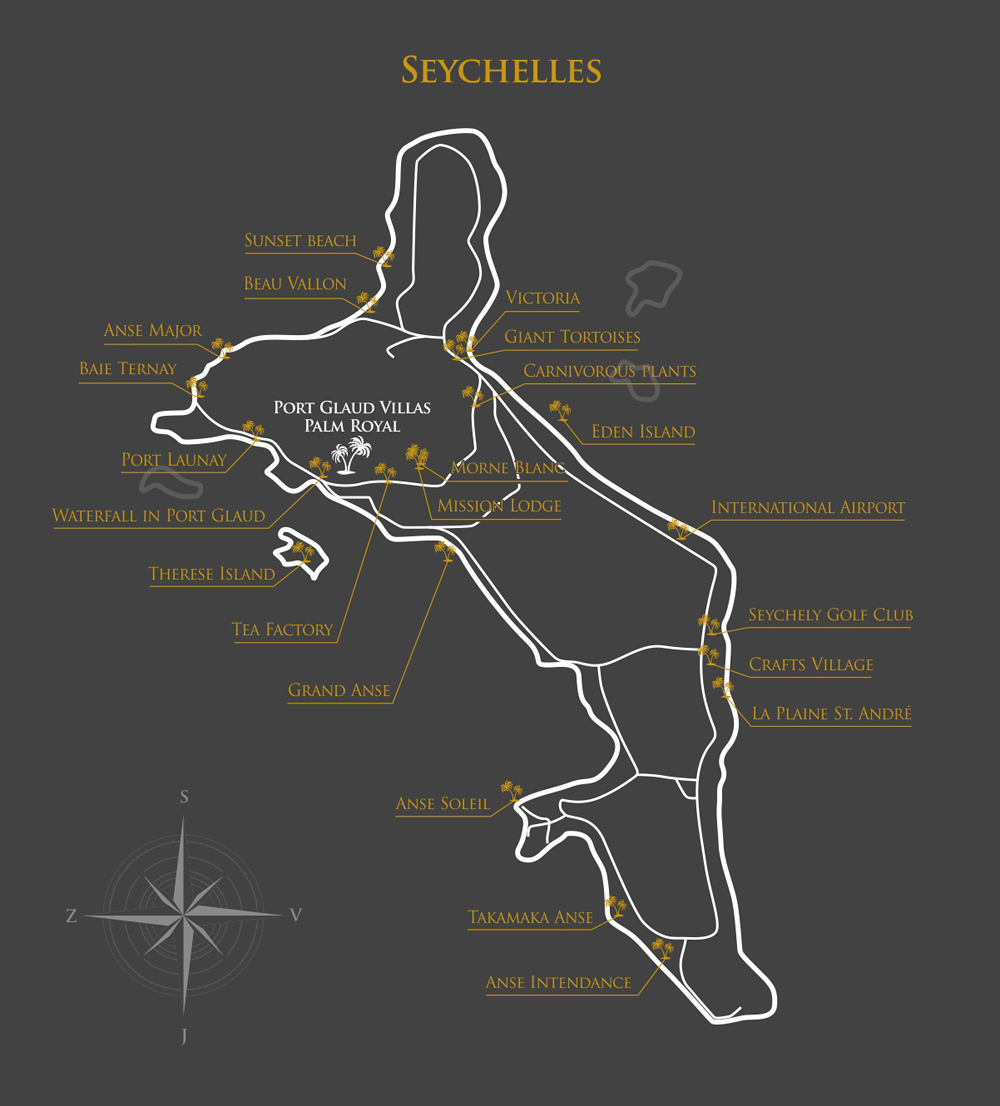 A beautiful small beach lined with palm trees, excellent for swimming and snorkelling. Turtles can be seen here and, as the name suggests, the sunsets are spectacular. 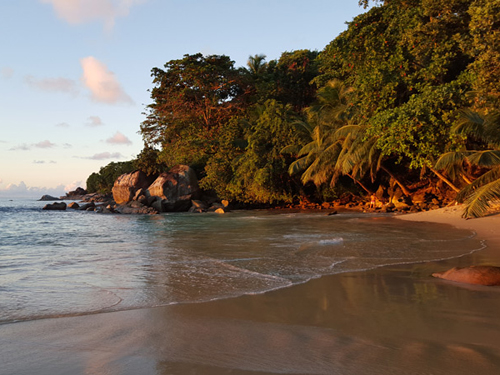 This stunning beach is part of the Marine National Park and is very close to Palm Royal Villas. It offers excellent swimming and snorkelling, during which you can see a wide variety of colourful fish. The beach itself is large and wide with white sand and plenty of shady trees. 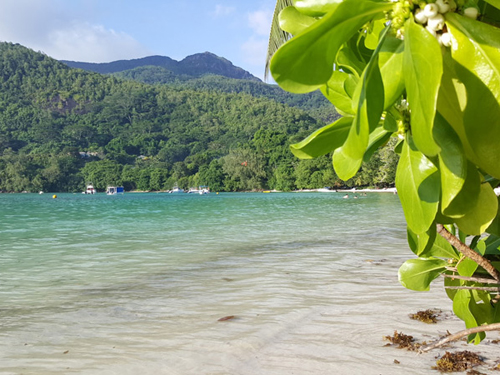 Great Mountain, rising up behind Palm Royal Villas. This is the second highest mountain in the Seychelles with a height of 667 m. The road leading to it leads off from the Sans Souci Road and the starting point just to the north of the Tea Factory. You can also leave your car there. The following climb is fairly steep and lasts about 45 minutes, but the result is definitely worth it! The mountaintop offers amazing views of the island coastline which you will not want to drag your eyes away from. 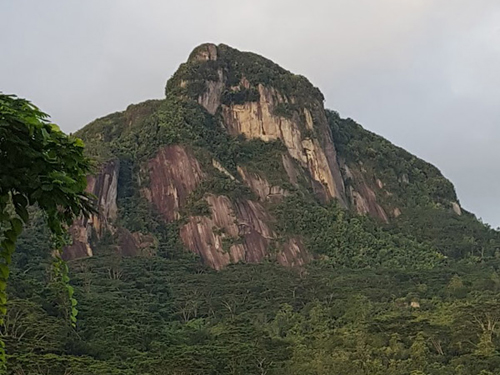 Therese Island is a small island off the west coast of Mahé. It has a white sandy beach 700 m long with numerous coconut trees. The island is uninhabited, but is a frequent and popular place for trips as it offers activities such as water sports, snorkelling, scuba diving, sailing, water skiing, windsurfing and deep sea fishing. It is located directly opposite the Palm Royal Villas. There are breath-taking views of it from the terraces of the villas. 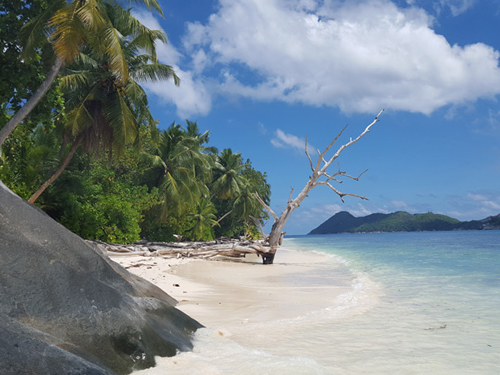 Grand Anse is one of the longest beaches on the island, and certainly the longest on the west coast of Mahé. Its magical scenery with turquoise blue water and white sand is complemented by the green hills which line the beach. Swimming is possible, but you must be careful as the water currents are strong here. 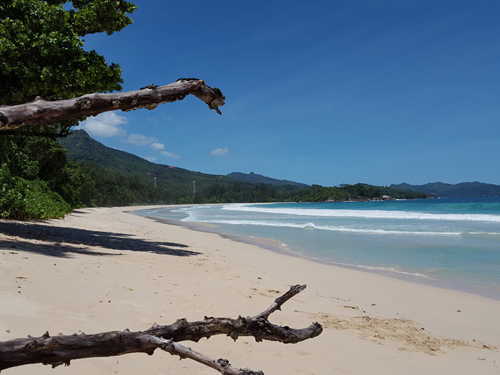 The waterfall in Port Glaud

Just a short walk from the Palm Royal Villas takes you to a beautiful waterfall, under which it is possible to bathe in fresh water. The waterfall is located on a hill above the church in Port Glaud and is open every Sunday. 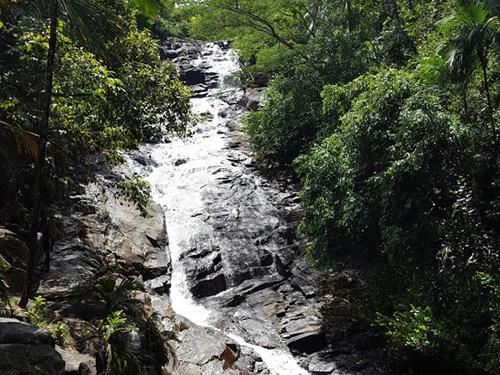 Anse Soleil on the southwest coast of Mahé is a small and very attractive bay and is ideal for swimming and snorkelling. It boasts crystal clear water and pristine white sand. As its name suggests, the beach is literally bathed in sunshine, but also provides plenty of shady trees. 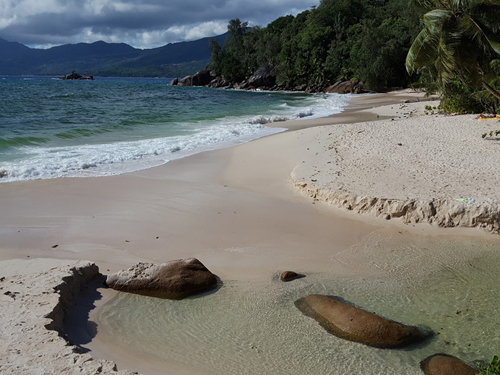 Anse Takamaka is a beautiful, picturesque bay in the southwest of the island of Mahé. You will find there the whitest possible sand and incredible turquoise waters, as well as stunning Takamaka trees that give the beach its name. Anse Takamaka is, among other things, also a paradise for snorkelling. 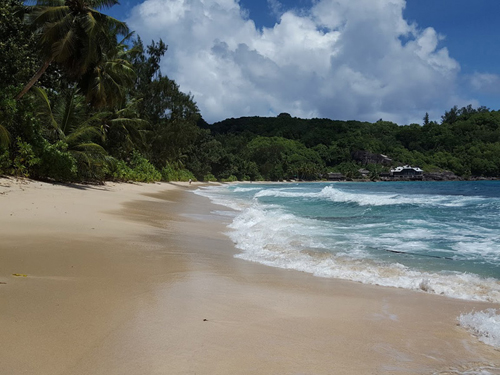 The famous Intendance beach in the south of Mahé ranks among the 10 most beautiful beaches in the world and I must say that this is true! A kilometre of incredibly white sand is bordered by majestic granite stones. There is not reef, so the waves are much larger than on most other beaches around the island. This means that swimming at the time of the southeast trade winds (May to September) may not be safe. Thanks to the powerful waves, the beach is ideal for surfing. 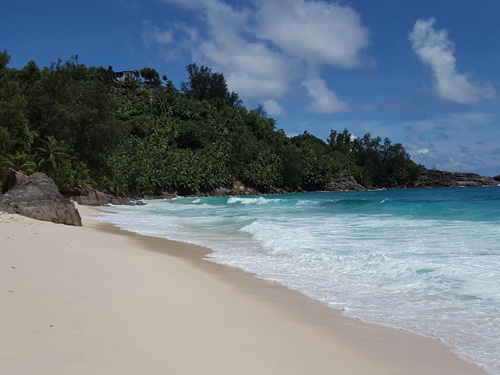 In the Creole cottages of this remarkable village, visitors will find all kinds of crafts: batik clothing, items of jewellery made from coconut shells and exquisite model ships. The village was created to support local arts and crafts. You can also visit "Gran Kaz", a colonial house with a covered veranda of painted wood which was built in the 19th century. 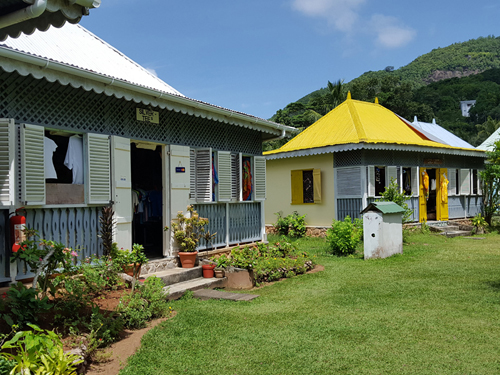 Seychelles Golf Club is a beautiful nine-hole course, which was established on the site of an old coconut plantation thirty years ago. The course is located in Anse aux Pins. The club is open daily from 8:30 a.m. including most holidays. There is no need to book tee times, except Thursday afternoons and Saturday when the tournaments take place there. The club also has a bar with DSTV, billiards and a café which also serves snacks. 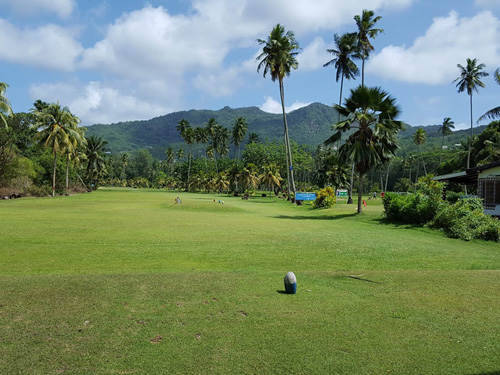 Seychelles International Airport (IATA: SEZ, ICAO: FSIA), or Aéroport de la Pointe Larue, Is located on the island of Mahé, a few kilometres south of the capital city Victoria. The airport serves domestic and international flights and is also the home base and the headquarters of Air Seychelles. 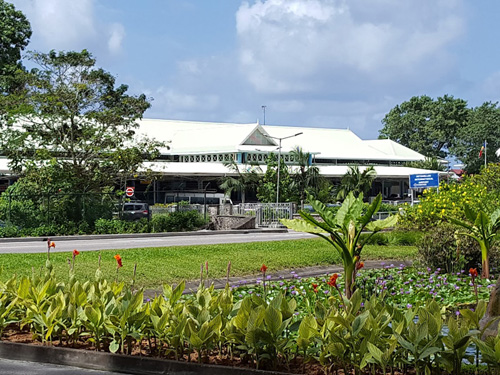 An artificially created island south of the capital Victoria, offering an international marina, 16 waterways, residential housing and a business centre with many shops and catering facilities. There is also a small aquarium with a display of the underwater kingdom which will in particular be appreciated by children. 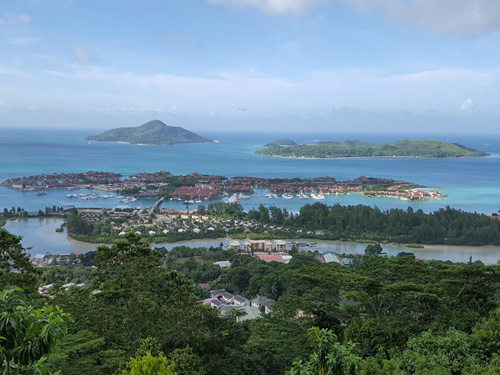 An interesting excursion into the bush, where you can see carnivorous plants with your own eyes. On the Sans Souci road, south of the capital Victoria, near the original entrance to Morne Seychellois National Park, you can expect a journey of about a kilometre on a road lined with lush tropical vegetation which will lead you to the carnivorous plants. Besides admiring these remarkable flowers, you can also enjoy beautiful views of the surrounding area. 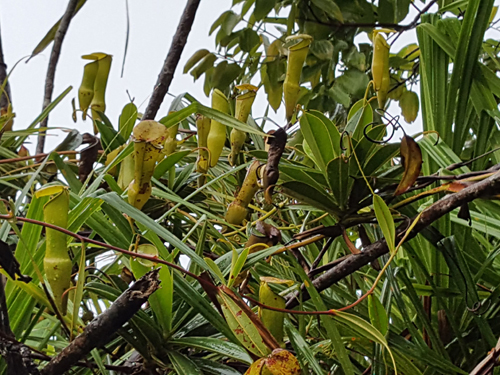 The main and only city on the island of Mahé in the Seychelles. A local attraction is the traditional Sir Selwyn Selwyn Clarke Market, where the stalls sell fruit, vegetables, fresh fish, eggs, flowers, spices, coconut oil, and much more. Upstairs in the market, there are shops selling souvenirs and local crafts. Victoria is also home to the so-called Clock Tower, which is an elegant replica of the original clock in London near Victoria Station. While visiting the capital, it is definitely worth visiting the botanical gardens located in Mont Fleurri, the Hindu temple in the city centre and the science museum. 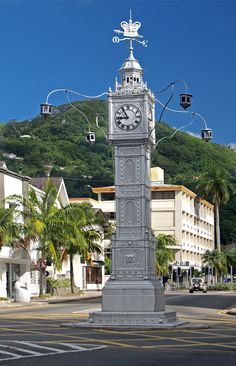 Seychelles Tea Factory, founded in 1962, is responsible for growing and making tea. It is possible to tour the tea production facility, have a cup of tea here or buy it, or just admire spectacular views of the western side of the island of Mahé. 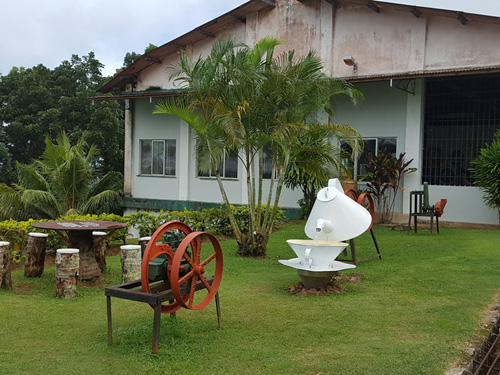 Mission Lodge is one of the most famous observation points and also part of the cultural heritage of the Seychelles. You will find here the ruins of a missionary school for the children of slaves after the abolition of slavery on the island in 1834. There is a gazebo nearby offering breath-taking views of the sea and the mountains to the south and where the British Queen Elizabeth II once stopper off for tea. 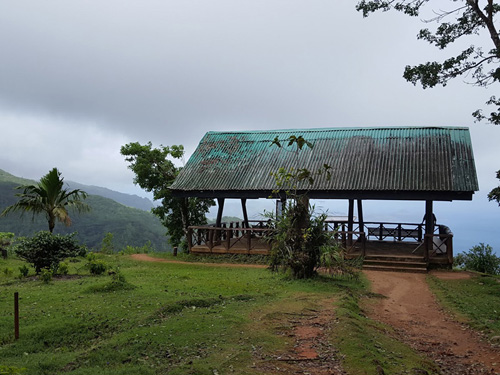 A little stop on the way to Victoria offers a view of a paddock with giant turtles which are a protected species. Giant tortoises can be seen also in the botanical gardens, where you can also feed them for a fee. 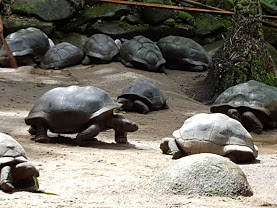 Baie Ternay Marine National Park is located in the northwest of the island of Mahé and is accessible only from the sea. It is a paradise for snorkelling and its hidden white sandy beaches hidden are absolutely ideal for sunbathing and swimming. Without direct access to the coastal road, this park has retained its wild life and natural beauty and a wealth of marine life abounds here. You can see dolphins, sea turtles, moray eels, catfish and many other animals in their natural environment. 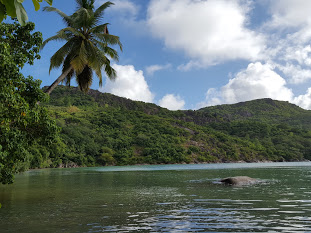 Anse Major is one of the most beautiful beaches on the island of Mahé. The bay is located in the northern part of the island boasts two wonderful white sandy beaches and coral lagoons. Middle Reef offers a good opportunity for snorkelling. 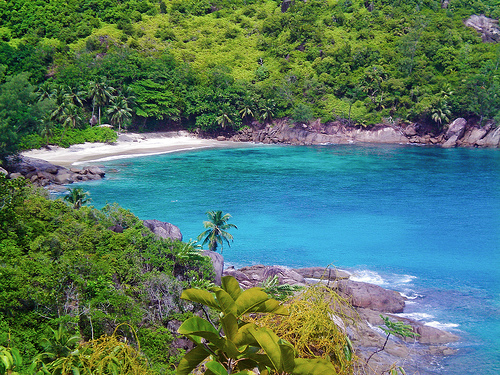 A large and very popular beach on the island of Mahé. This paradise for water sports and scuba diving centre provides an active form of relaxation. Long bay is boasts white sandy beaches and crystal clear water and is also very suitable and safe for children because there are no strong currents. 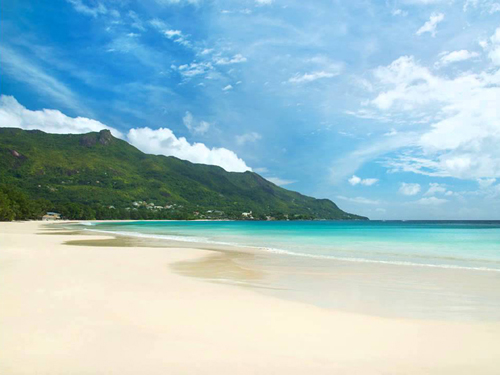 As the new home of Takamaka Bay Rum, no visit to La Plaine St. André would be complete without visiting the Trois Freres Distillery followed by a rumtasting. Follow the process from cane crushing to fermentation, distillation and finally sample our awardwinning range.Take a tour of the grounds during which you will learn about plantation life in the 1790s, the beginnings of the creole mix which is visible today. 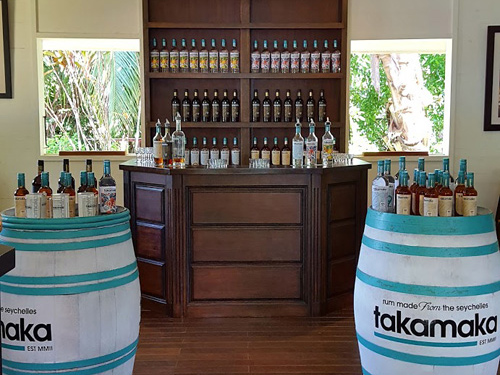 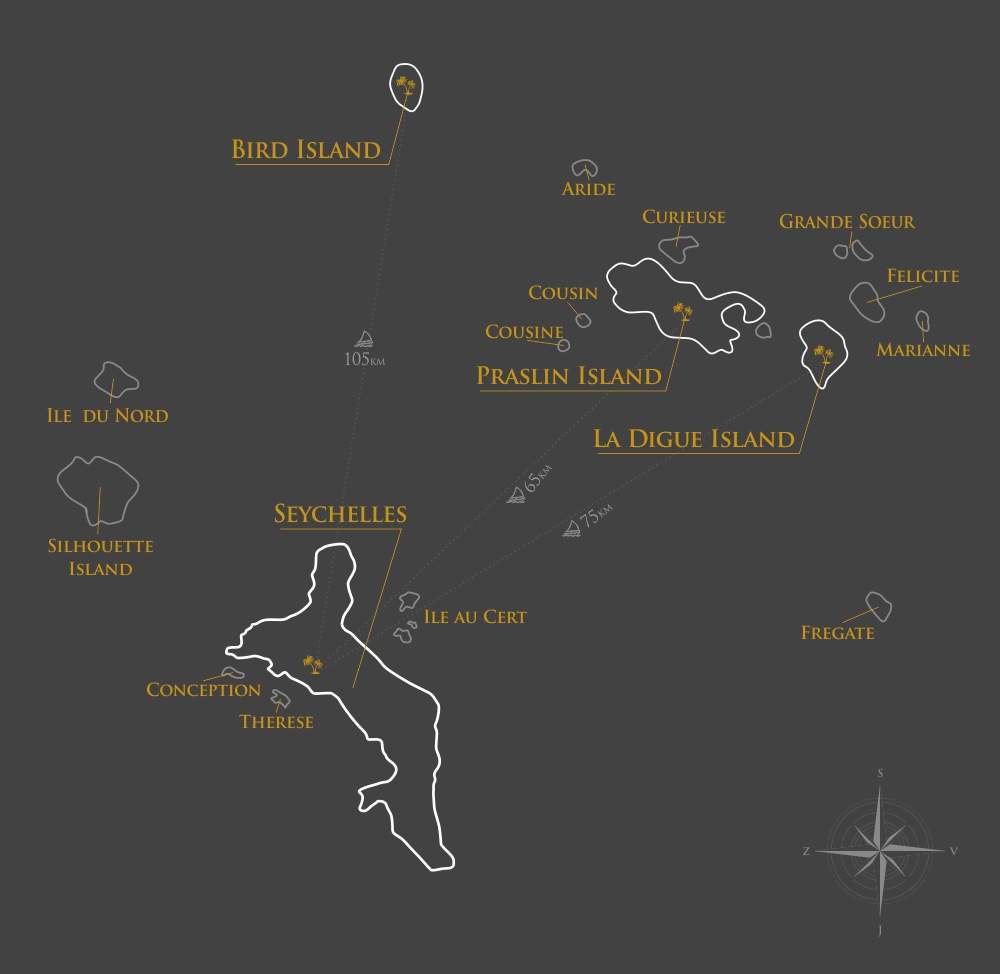 Bird Island is located 30 minutes from Mahé by plane. As the name suggests, Bird Island is an island of birds. During the southeast monsoon (May to September) the island is completely colonised by thousands of black terns which build their nests there every year. In addition to this, the most famous giant turtle in the Seychelles, Esmeralda, lives on Bird Island. She is the heaviest (300 kg) and the oldest in the world. 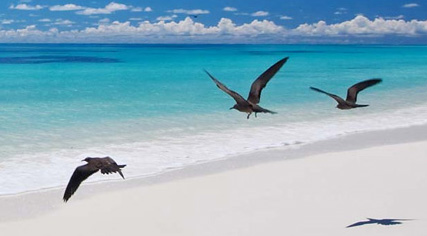 La Digue island has its own unmistakable charm, as it resists the influence of time. The island is reachable by ferry from the island of Praslin or by helicopter or private boat from Mahé. Worth a visit is L'Union Estate, a former coconut plantation, where today you will find vanilla plantations, a pirate graveyard and giant tortoises. In the southern part of the island, you will find the most photographed beach in the world, Anse Source d'Argent, which has been used as the backdrop of many famous films and commercials due to its beauty. 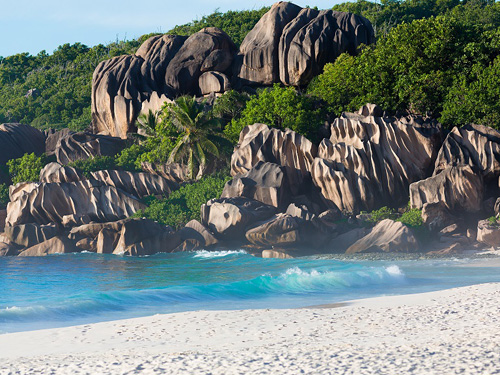 You can reach Praslin Island from Mahé in 15 minutes by plane or in less than an hour by boat. Praslin is not as mountainous as Mahé, the highest point being 330 meters, but it has similar granite rocks surrounded by beautiful beaches. One of these is the famous Anse Lazio, which is considered one of the five most beautiful beaches in the world. The unique and legendary palm known as coco de mer also grows on the island of Praslin. You can find it in the Vallée de Mai which is a UNESCO protected nature reserve. We highly recommend you visit. 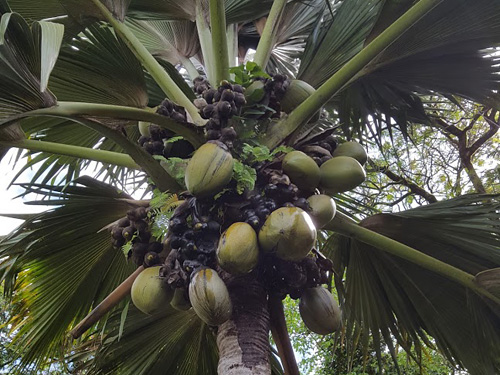